First of all, let’s go through some general basics about buttons and buttonholes.

A bound buttonhole should not be wider than 6 mm (1/4"), so each inset is 3 mm (1/8"). My book also tells me to sew all the buttonholes at once, finishing the same detail on each buttonhole before moving on to the next detail. Apparently that's the trick to get them identical! There's different ways of marking up the buttonhole, but I have to say the method I've used for my test was very convenient, marking both edges and the centre front with machine basting. This technique is of course dependent on your fabric, and you shouldn't use it if the stitches will show after you've pulled the thread out. Hand basting with silk thread will be better for fine fabrics.

Bound buttonholes for my buttons

I've been a good gal and read through the different ways of making bound or jetted buttonholes as presented in Reader's Digest Complete Guide to Sewing. It was no more than eight pages + 2 pages introduction! And as I'm not known for reading sewing instructions, I was quite proud as I followed it step-by-step, and even took pictures with a tutorial in mind! What do you think, anyone interested? I was at least happy with my first test, although I need some serious measuring of my sewing machine foot, to find exact 3/6mm marks...

It is very tedious, but it is not very complicated if you just work accurately from the first step. I chose the technique called 'simplified technique', recommended for beginners. The good thing with this is that you can control the length and width of stitches and folds before you cut open the buttonhole. Quite clever, ey?

My aim is to make bound buttonholes for this dress. You've probably forgotten all about it, but it's been pinned on to my dummy for ages, making me guilt-ridden. Well, now the skirt is sewed on, and all it needs is hemming and buttons! And of course, buttonholes...

Are you pro bound buttonholes? And do you want me to whip up a picture series (hopefully it'll deserving the name 'tutorial')?
2 comments:

Buttons? I'll give you buttons!

I've just come back from a work-related conference in Istanbul, and didn't expect to buy anything sewing-related. I didn't even do any research for possible sewing areas or shops. This was a business travel with a tight schedule, and I didn't think I'd see anything else than the Hagia Sophia and The Blue Mosque on an organized sightseeing. I was wrong! Really wrong! By pure chance we walked around an area around the Spice Bazaar (I think the name of the street is something like Vasif Cinar Caddesi, but I'm not sure) and suddenly plenty of fabric shops and shops dedicated to buttons popped up! I told my colleagues that I just had to go into this one having a very tempting façade and windows... I got the card, and think the shop is called Has-Er Tyuhafiye. The very polite, young gentleman behind the counter told me that this was all wholesale, but when he told me the price of a box with 60 buttons, I tried not to laugh: It was ridiculously cheap! I looked around at the ground floor and didn't see any red buttons, and asked him whether they had something like this and that, and he said: Next floor, madam, we have more upstairs. It turned out that there were 4 floors altogether! I didn't dare check out the topmost floor, because this was apparently a floor with other sewing stuff than buttons... I planned to go back one of the other days, but didn't have time. I'm glad I at least bought these:

The sad thing is of course coming home with plain, black buttons, but I also bought these, having my planned red trenchcoat in my mind:

I just love the boxes they come in:

Ellen is a lucky girl! 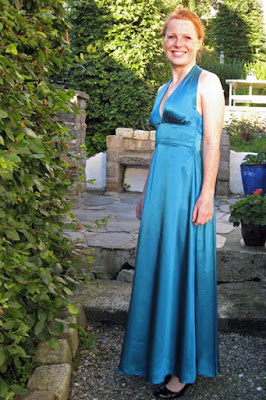 I made a slip of the tongue, and promised Ellen I'd sew another dress for her. That was maybe half a year ago, and suddenly the wedding she was going to attend came really close... So I convinced her that the dress she already has is a very good fit on her, but this time we'd make a longer and wider skirt . So in two weeks (having it really busy at the lab as well) I finished this dress for her.

I did two fittings, and since she's quite short, I shortened the front pieces with 4cm. By doing so, I kept the curve from the halterneck, and the curves around the arms became very flattering. By having more than enough fabrics and having bought serrated shears, cutting the polyester micro satin and the acetate lining from Stoff&Stil was a lot easier than expected. 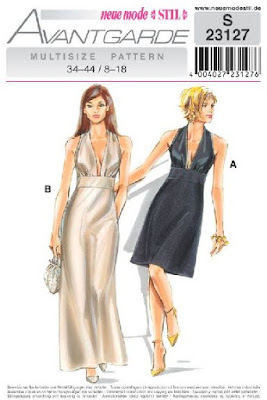 I love this pattern, neue mode/stil (S23127), because it is quite easy and Ellen looks so gorgeous.  I skipped the gap on the front pieces though, to make it a little bit more decent.Unfortunately, I get headaches from wearing halternecks, so I would had to do some compromises if I were to make this dress for my self. Too bad, because I felt so elegant 'trying' it on (Ellen is tiny, so I could only slip the halterneck over my head, pretending I was wearing it...). Does anyone have any ideas on how to make a dress like this, but avoiding the halterneck? Full covered back or crossed back pieces? 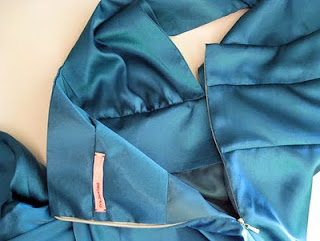 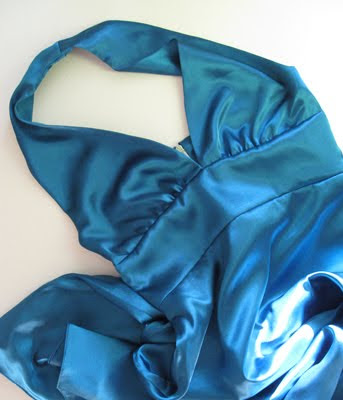 frk.bustad
Welcome to my blog! I'm Helene, an advanced beginner seamstress, coffee addict and biochemist. This is where I'll share my sewing ups and downs and inspiration. Enjoy!